Rabbit derived monoclonal antibodies have long been outstanding reagents in laboratory research and have become important starting points for therapeutic molecules. This value is courtesy of the natural evolved developmental pathway of rabbit B-cells, which diverges from the mechanism of that of human and mouse. This difference results in a distinctive rabbit immune repertoire, which can be harnessed in antibody therapeutic programs.

Rabbits (Oryctolagus cuniculus) belong to an evolutionary distinct order to that of rodents such as mouse and rats. This affords molecules of rabbit origin the utility of recognizing human derived epitopes that are non-immunogenic in rodents, increasing the total targetable epitopes. When used in discovery programs, rabbit platforms have been shown to produce a strong immune response elicited by small molecules and haptens, an uncommon process in mice. Furthermore, there is evidence that rabbit-based systems produce antibodies that are more diverse, sensitive and some evidence suggests they may also have higher affinity that those raised from mouse.

Humanization of rabbit-derived molecules however, is more difficult owing to the divergent structure of rabbit immunoglobulins when compared to rodent or human. For example, rabbit IgGs have an expanded hypervariable LCDR3 and more sequence and structural diversity in light chains.

Much of the structural divergence from human molecules stems from differences in disulfide architecture, with different inter-heavy chain, additional inter-domain light chain, and the possibility of both intra- and inter- CDR disulfide bridges.

As mentioned previously, this leads to attractive properties in terms of the discovery of diverse, high-quality binders, but leads to significant obstacles during humanization.

Despite the attraction of rabbit-based discovery platforms, the vast majority of approved therapeutic antibodies are of mouse origin.  Established mouse platforms maintain a critical tool in therapeutic development. We have extensive expertise in the discovery and humanization process from several diverse non-human species including mouse and rabbit, affording the ability to design highly bespoke projects dependent on a client’s requirements.

We have performed many rabbit antibody humanizations as part of >240 successful humanization projects with years of experience and expertise in the area. Our propriety CDRx™ platform (outlined in Figure 1) is based on a next generation CDR grafting technique in which CDR loops are intelligently identified with in-house algorithms and grafted onto a library of mature human frameworks. T-cell epitope screens are included in the design process to effectively deimmunize candidate molecules. Adapted algorithms facilitate a high throughput process, enabling humanization of multiple hit molecules in parallel.

Homology modelling and intelligent design principals are utilized to select ideal frameworks whilst avoiding sequence liabilities. This quality by design approach results in humanized proteins with ideal developability profiles, ultimately with the end goal in mind.

Traditionally, many humanization techniques have been concomitant with affinity loss, halting progress to the clinic and dictating the antibody development route through time and resource consuming affinity maturation programs. Our proprietary CDRx™ humanization platform (outlined in Figure 1) is not only robust enough to guarantee affinity to within 2x that of the parental antibody, including more difficult molecules from rabbit origin, but we often observe several-fold affinity improvements in our humanized antibodies afforded by the generation of a diverse matrix of humanized molecules. 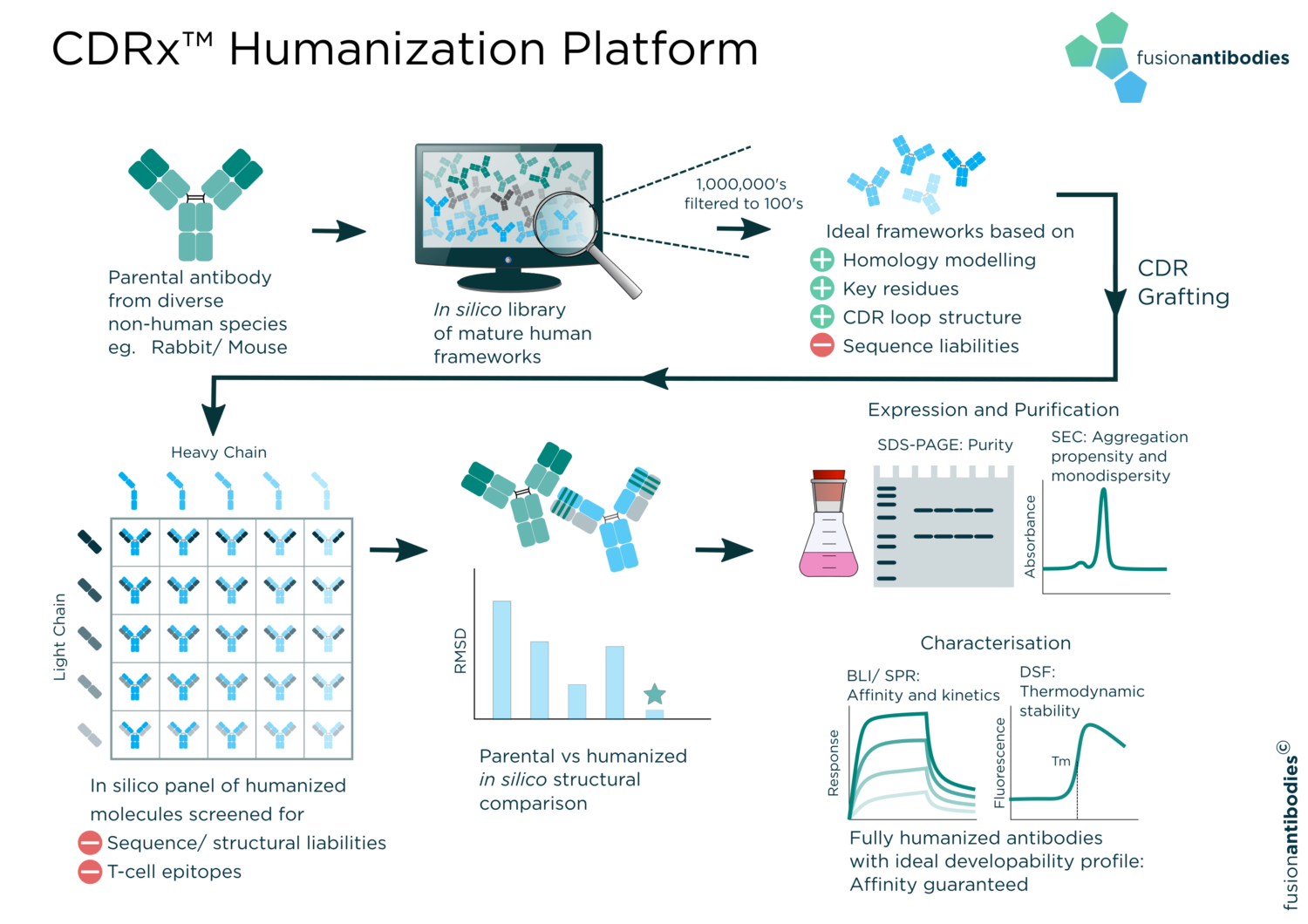 Optimize your antibody to be the best

About Fusion
Our Board
Senior Leadership Team
Scientific Advisory Panel

We may request cookies to be set on your device. We use cookies to let us know when you visit our websites, how you interact with us, to enrich your user experience, and to customize your relationship with our website.

Click on the different category headings to find out more. You can also change some of your preferences. Note that blocking some types of cookies may impact your experience on our websites and the services we are able to offer.

These cookies are strictly necessary to provide you with services available through our website and to use some of its features.

Because these cookies are strictly necessary to deliver the website, refusing them will have impact how our site functions. You always can block or delete cookies by changing your browser settings and force blocking all cookies on this website. But this will always prompt you to accept/refuse cookies when revisiting our site.

We fully respect if you want to refuse cookies but to avoid asking you again and again kindly allow us to store a cookie for that. You are free to opt out any time or opt in for other cookies to get a better experience. If you refuse cookies we will remove all set cookies in our domain.

We provide you with a list of stored cookies on your computer in our domain so you can check what we stored. Due to security reasons we are not able to show or modify cookies from other domains. You can check these in your browser security settings.

We also use different external services like Google Webfonts, Google Maps, and external Video providers. Since these providers may collect personal data like your IP address we allow you to block them here. Please be aware that this might heavily reduce the functionality and appearance of our site. Changes will take effect once you reload the page.